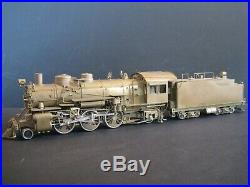 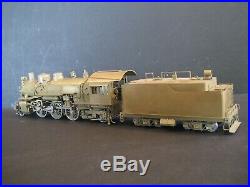 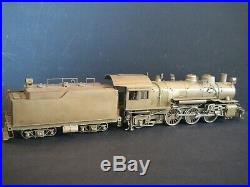 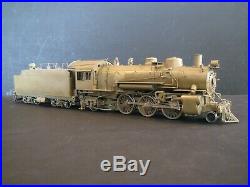 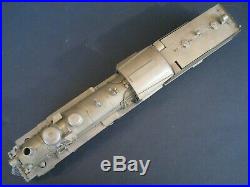 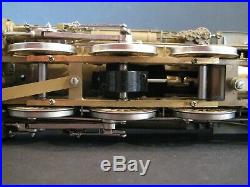 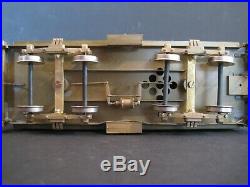 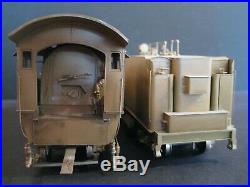 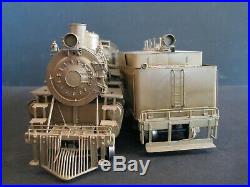 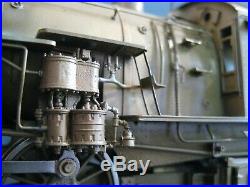 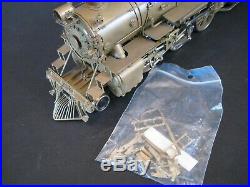 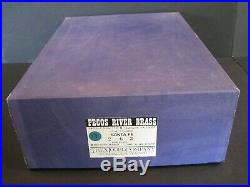 This is an O Scale Pecos River Brass AT&SF Class 1800 2-8-2 with the 9,000 gallon tender. The box label also says The Model Company, Auckland New Zealand and I dont know who that was.

It has very little tarnish. I suspect it has been run some, but not much.

One of the trailing truck wheels has a small anomaly in the nickel plating. I dont know if it is sort of a bubble or the start of a piece flaking off.

It might be minor, but not so minor that I didnt notice it. It runs fine and smooth. However, if planning to run it, it should be lubricated since it has been stored unused for at least twenty years.

It has a parts package with brake shoes and some other little assemblies including a couple with ladders and some brass dummy couplers and some screws. Im assuming these are something the modeler is expected to add. But there are no instructions for that. The tender hatch opens which is a nice touch. It has its original paperwork.

This includes a letter that describes how the Hodges trailing truck is designed to work like the real one but a change so it would go through switches better. It also says there had been a miscommunication between them and the builder about how much detail should be on the back head.

That some modelers thought it more than enough, some wanted more. And if you were one who wanted more then to contact them and Paul would get you another. I suspect it is a little too late to take them up on that! The box is in good condition but a bit dirty and a little shelf wear. Please see my other listings.

I'm just a model railroader, not a business. Pecos River Brass themselves sent me the following information and suggested I include it.

It explains the New Zealand connection and has other interesting history of this engine. Here are those comments in their entirety. John Smith of Pecos River Brass here.

You might include this on your listing. Model builder was Paul Bernsten of New Zealand.

I knew a friend there who contacted him for me. He was a "one only" custom builder, terrific, spoke English, and wanted to get into the production business so we met and I hired him. He did a few small projects for me then moved up to locos. He had different ways of doing things which caused some anger among my buyers. He did 50 of these for me and another 20 of the 4-4-2, which used many of the same parts. This was done with two different tenders.

The trailing truck seemed to anger most customers but actually was built the way the prototype worked in that the wheels moved between the side frames. It took a little love and care to get the boxes centered on the hole, but bending the tongue. On my sample it took me about an hour to adjust it perfectly, and then it ran for hours. Paul didn't like mass production and quit after these models. He said I was sent to the office to do the paperwork and had others building the models.

This item is in the category "Toys & Hobbies\Model Railroads & Trains\O Scale\Locomotives". The seller is "trainliker" and is located in Atascadero, California. This item can be shipped to United States.