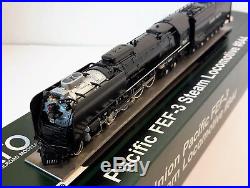 The Union Pacific FEF (F our E ight F our), along with the GS-4 is easily one of the most recognizable US steam prototypes still in operation today. The FEF-3 series of steam locomotives was delivered in 1944 and were the last, and some of the largest, steam locomotives delivered for use by the Union Pacific. Today, FEF-3 #844 (at some times during history also known as #8444 to avoid numbering conflictions with a diesel loco) survives to pull excursion trains as a publicity locomotive for the Union Pacific, and is one the UP's oldest operating locmotives. Accompanying the "living legend" FEF-3 is always at least one of a pair of Union Pacific Water Tenders, carrying spare water for the steam engine (Water filling stations being a rarity in the diesel era). These unique re-built cars have seen service as both Steam and Gas Turbine Electric fuel tenders before finally settling into their current forms as part of UP's steam heritage fleet where they operate as separate (but always-present) cars.

The Kato N Scale FEF-3 follows in the footsteps of its Southern Pacific 4-8-4 cousin. Refining the basic concept of a high-power, flexible steam locomotive which is easily upgradable to DCC by coupling a special, isolated coreless motor drive system with heavy duty flywheels and a flexible cross-braced suspension system that gives the locomotive a high torque, high traction grip that ensures constant and consistent pressure spread across the primary drivers. Another benefit of the coreless motor system is that the locomotive will have an extremely low starting voltage, giving the locomotive slow creeping speeds that will allow modelers to appreciate the complex arrangement of moving side rods that make steam operation so exciting. Other features, such as the locomotive's unique "Centipede" style tender being fitted with special articulation mechanisms that appear seamless when observed but will bend and flex to allow the locomotive to navigate tighter corners than should otherwise be possible! New coreless motor design with dual brass flywheels for silky-smooth performance at all speeds, even slow crawls.