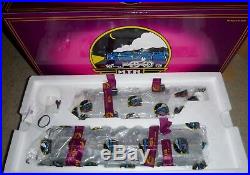 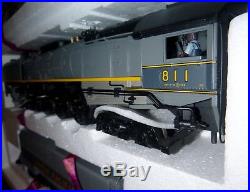 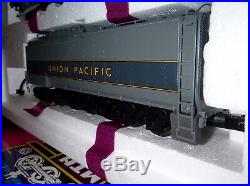 One of the most celebrated locomotive series in railroading history, Union Pacific's Mighty "800's" established new standards for performance upon their debut in the 1930s. One of the early FEFs (UP shorthand for "four-eight-four") stood up to a 1938 national speed test, hitting the 102 mph mark with a 1,000 ton load, outstripping the competition put up by Pennsylvania and Chicago NorthWestern! In 1962, the UP's #844 (the last of the series) was reconditioned and renumbered 8444. Currently, the 8444, which was never retired from service, has regained its original 844 number and now sports an all-black paint scheme. A featured engine at RailfairT'99 in Sacramento, she remains an active national treasure for all railroading fans to enjoy, frequently providing motive power for railfan excursions.

Metal Handrails and Decorative Bell. Proto-Sound 2.0 With The Digital Command System Featuring:- Passenger Station Proto-Effects. Unit Measures:30-1/4" x 2 3/4" x 4 - Operates On O-54 Curves. Compatible with all O Gauge 3-Rail track systems, including those made by Atlas, Gargraves, Lionel, and Ross Custom Switches. The box has never been opened (except for pictures and testing)!

WE DO USE STOCK PHOTOS PROVIDED BY MTH/RAILKING, BUT IT IS VERY OBVIOUS WHICH ARE STOCK AND WHICH ARE OUR OWN. THE STOCK PHOTOS PROVIDED BY MTH ARE FOR THE MODEL NUMBER FOR THE TRAIN PROVIDED, BUT IN CERTAIN YEARS THEY MADE HAVE PRODUCED ONE OR MORE TRAINS WITH MINOR DIFFERENCES UNDER THAT MODEL NUMBER. TRAINS MARKED NIB/NEW IN BOX HAVE NEVER BEEN RUN ON RAIL AND WERE NOT USED FOR DISPLAY. THEY HAVE BEEN TESTED WITHIN THE LAST 6 MONTHS, AND ANY ISSUES WILL BE NOTED. IF THERE IS A MANUAL (SOME SEALED BOXES WE OPENED DID NOT CONTAIN THEM) YOU WILL SEE IT IN THE PHOTOS.

ANY ADDITIONAL PIECES WILL ALSO BE IN THE PHOTOS OR WILL HAVE BEEN INSTALLED FOR THE TESTING PROCESS. BECAUSE OF THE AGE OF SOME OF THE TRAINS, THE PROTOSMOKE MAY HAVE BEEN TOSSED BECAUSE IT WAS NO LONGER ANY GOOD. ALL MTH/RAILKING TRAINS MANUALS ARE AVAILABLE FROM THE MTH SITE.

If you have any questions or would like to see more pictures, feel free to send us a message. This model steam engine set would make a great addition to your current Union Pacific setup, or a stunning starting piece to that new unique Union Pacific model line you've been wanting to start. This would also be a fantastic gift for someone that is in to model trains or collects Unioin Pacific train line memorabilia! A lot of them are new, some are used or were taken out of their box for display.

We also have build kits, tracks, and all other accessories. Item comes from a smoke-free facility. The item "MTH O SCALE Premier FEF 4-8-4 Northern Steam Engine Set Union Pac 20-3078-1 NIB" is in sale since Thursday, December 20, 2018.