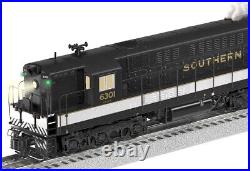 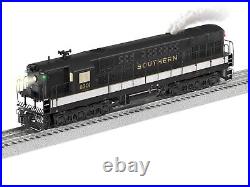 LIONEL LEGACY SOUTHERN TRAIN MASTER Diesel Engine #6301 2033431 O Scale. See my other o scale listings. Billed as one of the most versatile locomotives available, the railroads which ordered the Train Master put that idea to the test. Assigned to everything from mountain grades and coal trains to daily commuter runs, the Train Master found work all across the country. Ultimately, it's different design and parts were just more than most railroads wanted to maintain as they standardized their diesel rosters. But the Train Master remains among the more unique and colorful locomotives to grace America's rails. Available for the first time with Bluetooth and LEGACY, you can operate this locomotive with any of our control systems. The models also feature a newly tooled single-headlight short hood option where appropriate. Available in some of our most requested paint schemes, these locomotives are ready to master whatever trains you decide to throw behind them.