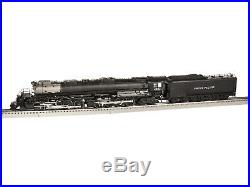 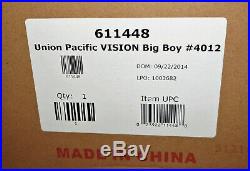 Lionel 6-11448 Union Pacific VISION LEGACY Scale 4-8-8-4 Big Boy #4012 NIB. This is the one located at Steamtown NHS Big Boy steam locomotive is the only one of its type located east of the Mississippi River and is a popular attraction. The Main Vision Line feature is it's Depleting Coal Load in the tender.

As the enormous hulk of the first of Union Pacifics new 4-8-8-4s emerged in ALCOs erecting plant in Schenectady, NY, a worker looked upon the brute and simply chalked Big Boy on the engines side. The apt but impromptu name stuck. This meant it had to be powerful enough to drag the train up the 1.14% grades without helpers and fast enough to maintain schedules on the rest of the section. What set the 25 Big Boys apart from other massive steam locomotives was not just its size but its purpose. The Union Pacific wanted a single locomotive capable of pulling 3,600 ton trains between Ogden and Wasatch. By 1962 the eight survivors could be found only in museums. Each of Lionels new Vision Line Big Boys represents one of these surviving legends. NEW VISION BIG BOY FEATURES: Dual Stack Smoke and Dual Chuff Sound : Each of the Big Boys 8 driver pairs required its own exhaust. Since the two sets were not in sync with each other, neither were the exhaust chuffs. Once the train got rolling, the thunderous exhaust appeared like a single, continuous blast but as the Big Boy got underway you could clearly see, and hear, the dual exhaust.

For the first time ever, each stack on the Lionel Big Boy has its own smoke unit. As you run your locomotive at low speed, youll get the unparalleled realism of distinctive dual chuffs. And with that second smoke unit, as the train gathers speed youll enjoy the extra volume of smoke as well.

Whistle Steam: This feature is still one of your favorites Vision features and ours, a plume of steam from the whistle. Blowdown Steam: Despite efforts to ensure the purity of the water used in locomotive boilers, impurities were always present. As the water evaporated to steam, these impurities remained. Routine blowdown of the boiler helped wash away the materials to keep the locomotive running efficiently between services. Steam blowdown valves on each side of the firebox emit great clouds as you steam clean your boiler.

Stereo Sounds: On a locomotive as large as the Big Boy, you could hear different noises coming from different places. Thanks to three on-board speakers two in the tender and one in the boiler youll get unmatched sound quality.

Some sounds will be localized; others shared across speakers for dramatic and realistic effect. Depleting Coal Load: Youve been running your Big Boy for almost an hour, how can the coal still be full? Thanks to this new Vision feature, it wont be! For the first time ever on an O Gauge model, the coal load in the tender of your Vision Big Boy will automatically drop as you run your train.

This visual effect is tied into the LEGACY control system meaning the harder you work your train the sooner youre going to need to stop to reload. This sophisticated system tracks the engines speed and labor to calculate the rate of fuel consumption. When youre running low, you can refill the tender coal and water with accompanying sound effects. A Demonstration mode will also be available for when you want to show off thisgreat feature in a hurry.

Use the Big Boy in conjunction with our new LCS SensorTrack to get the most out of your experience. Any more realistic and youd have to wear gloves! LEGACY Control System equipped able to run in LEGACY Control mode, in TrainMaster Command Control mode, or in Conventional mode with a standard transformer. Odyssey II Speed Control with On/Off switch. LEGACY RailSounds sound system featuring:-CrewTalk dialogue and TowerCom announcements, CrewTalk dialog and TowerCom announcements, each with different scenarios depending on whether the locomotive is in motion or stopped-Six official railroad speeds with Crew-Talk dialog-DynaChuff synchronized chuffing that shifts through 32 levels of intensity as the locomotive gains speed-LEGACY "Real-Time Quilling Whistle" control with instant response for realistic signature "quilling" and correctly timed warning signals-Single hit or continuous mechanical bell sounds-Sequence Control plays the sound effects of an entire trip, including warning sounds and announcements, based on the movement and speed of the locomotive-Current speed and fuel dialog, refueling sound effects-Four-chuffs per drive wheel revolution -New! Dual Sounds (or Stereo Sounds)--With a sound system equipped in the locomotive as well as the tender, Dual Sound enhances sound realism and localizes a wide variety of authentic sound effects. Powerful maintenance-free motor with momentum flywheel. Wireless Tether connection between locomotive and tender. Depleting Coal Load in tender responds to actual running time, engine speed and labor. ElectroCoupler on rear of tender. High level of separately applied detail parts. Directional lighting including operating headlight and back-up light on rear of tender. Illuminated classification lights on the front of locomotive. Die-cast metal locomotive body, pilot, and trucks.

Blowdown Steam on each side of the firebox. Whistle Steam smoke effect in sync with whistle sound. Dual Smoke --Each stack is equipped with its own smoke unit, released in sync with dual chuff sounds. Die-cast metal tender body and trucks.

I was waiting for that day that I would have a layout but that day has never come about so there is no sense in me holding onto all of these trains and accessories. Almost everything I have is Modern Lionel with some MTH & K-Line which includes many doubles and almost every modern accessory and operating cars, not to mention all of the Scale equipment. My collection includes many hard to find items and almost everything has never been run or displayed.

A lot of the items have never even been out of their boxes except to take photos of them. And some are still factory sealed. I have come down with some medical conditions that has hurt me physically from getting some items listed over the past couple of years. So I'm just starting to get around and will be listing items again. So please check back for more of my auctions.

I'm sure you will see some very desirable and rare pieces. We can not combine items such as train sets or other larger heavy items. We want you to be a satisfied customer. PHOTOS : Shown are actual items of product for sale.

This item is in the category "Toys & Hobbies\Model Railroads & Trains\O Scale\Locomotives". The seller is "spikeat9" and is located in Sparrows Point, Maryland.