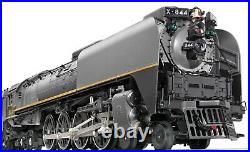 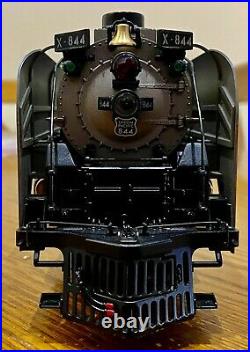 This engine holds the distinguished honor of being the only steamer never retired by a North American Class I railroad, and the last steam locomotive ever built for the Union Pacific. Still used for company and public excursions, it is kept at the Union Pacific engine house in Cheyenne, Wyoming. Now the legendary #844 FEF-3 (Four-Eight- Four, Series 3) locomotive is offered by Lionel. It is made from all-new tooling, and comes equipped with the LEGACY Command Control System, LEGACY RailSounds, and prototypically accurate detailing and decoration. The Lionel FEF-3 locomotive is available in two classic schemes: black with a light graphite smoke box and firebox, or two-tone grey passenger scheme featuring Armour Yellow lettering and striping. Both FEF- 3 locomotives are accurately modeled with dual stacks and elephant ear smoke deflectors that reduced smoke flow over the cab, a Worthington SA feedwater heater, and an all-weather enclosed cab with an opening roof hatch. The engine is matched with a prototypical 14-wheel centipede oil-firing tender.

Equipped-able to run in LEGACY Control mode, in TrainMaster Command Control mode, or in Conventional mode with a standard transformer. Sound system featuring:- CrewTalk. Announcements, each with different scenarios depending on whether the locomotive is in motion or stopped-Five official railroad speeds with CrewTalk dialog-DynaChuff synchronized chuffing that shifts through 15 levels of intensity as the locomotive gains speed-LEGACY "Real-Time Quilling Whistle" control with instant response for realistic signature "quilling" and correctly timed warning signals-Single hit or continuous bell sounds-Realistic operator-controlled effects, including the water injector-Independently adjustable volume control-use the Remote Controller to lower the level of background effects such as chuffing while keeping operator controlled effects such as the whistle at full volume. FatBoy speaker for the ultimate in sound reproduction.

The item "Lionel 6-11116 Union Pacific Legacy Scale 4-8-4 FEF Northern Greyhound #844" is in sale since Tuesday, October 5, 2021. This item is in the category "Toys & Hobbies\Model Railroads & Trains\O Scale\Locomotives". The seller is "danny_112762" and is located in Barboursville, Virginia. This item can be shipped to United States.