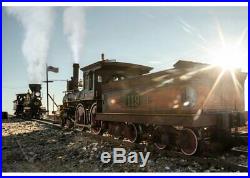 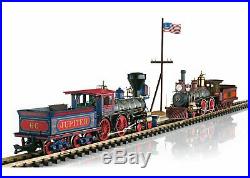 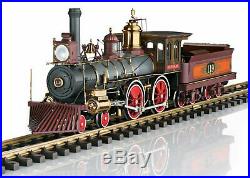 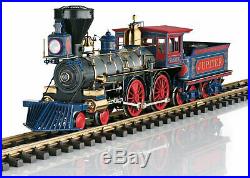 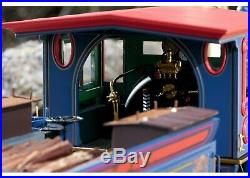 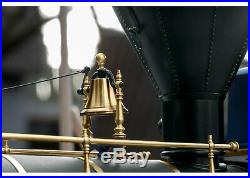 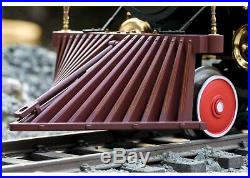 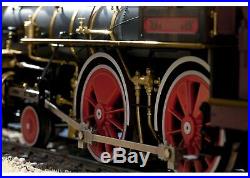 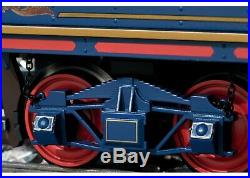 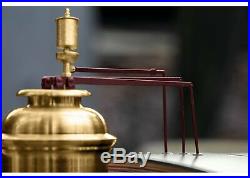 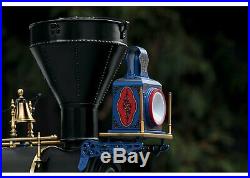 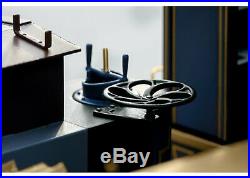 Figures of locomotive engineers and firemen included. Real gold-plated 1:1 reproduction of a track spike included. Model flagstaffs with authentic flags included. Limited worldwide to 299 pieces. This is a set consisting of two steam locomotives as they looked at the opening of the first transcontinental railroad in the USA.

The construction, paint schemes, and lettering are the same as the two replicas - Union Pacific RR locomotive "119" and the Central Pacific RR "Jupiter" locomotive as they presently are at the memorial site at Promontory Summit in Utah. These are finely detailed models with heavy metal construction including many separately applied details. Each locomotive is driven by a powerful motor, has an mfx/DCC decoder with many light and sound functions such as headlights, cab lighting, firebox lights, and much more. The running sounds and a whistle and bell activated by reed switches will also work in analog operation.

Each locomotive has a built-in smoke unit with steam exhaust synchronized with the wheels as well as cylinder steam and steam exhaust at the whistle, when the latter is activated. The cab doors and smoke box doors can be opened. There is a detailed working link & pin coupler on the tender and the cowcatcher on the front has a separately applied, movable drawbar. The running gear mounted inboard on the locomotive frame is fully modeled and moves. The coupling between each locomotive and its tender can be adjusted for two lengths.

Length over the couplers for locomotive "119" 55 cm / 21-5/8", for "Jupiter" locomotive 52 cm / 20-1/2". A reproduction of an American track spike constructed of metal and genuine gold-plated is included with the models.

In addition, there is also a flagstaff to go on the locomotives and it includes an American flag. The locomotives are packaged in a quality wooden case. Figures of locomotive engineers and firemen as well as LGB standard couplers and American knuckle couplers are also included. One-time series in 2019 for the 150th anniversary of the completion of the transcontinental railroad in the USA limited worldwide to 299 pieces. When the first American railroads went into operation, the Americans could already imagine a transcontinental connection by train. This idea soon won more and more adherents. At the start of the American Civil War in 1861, there were already 31,000 miles / 50,000 kilometers of lines in the eastern states more than in Europe at that time.

Only a very small part were located west of the Missouri. A railroad line bridging the continent promised many advantages, such as an expansion of trade, a shortening of the travel time for immigrants, and support for the army in keeping enemy Indians under control. In 1862, Congress therefore approved construction of a transcontinental railroad connection. The "Central Pacific" was to go east from Sacramento and the "Union Pacific" was to go west from Omaha.

Both railroads began construction in 1863. However, they did not make great progress initially because the country's attention was focused on the Civil War. It was not until after the end of the war in 1865 that it went rapidly forward, since now enough workers and material became available. The workers for the "Central Pacific" immediately came up against the problem of overcoming the high mountains of the Sierra Nevada. The terrain for the "Union Pacific" was to be sure straightforward.

Its workers constantly had to fight off attacks from Indians. Each mile to be completed required eight flat cars of material. Providing this proved extremely difficult for both companies.

In particular, the "Central Pacific" was compelled to bring every track spike and every locomotive 15,000 miles by ocean around Cape Horn. Nevertheless, both companies made faster progress than expected. The work crews, often led by former army officers, were drilled in such a way that they could lay 2 to 5 miles of rails per day on flat terrain.

The "Union Pacific" looked for its people among the unemployed in America, such as Irish, German, and Italian immigrants, former soldiers of the North and South as well as former slaves all total 8,000 to 10,000 workers. Due to the Gold Rush, not enough labor could be found in California. Therefore, the "Central Pacific" had to import 10,000 Chinese, who formed the backbone of the railroad construction here. By the middle of 1868, the workers of the "Central Pacific" had crossed the heights of the Sierra Nevada and had laid 200 miles of rails.

The "Union Pacific" accomplished 700 miles in the same amount of time on flat terrain. As the tracks approached each other, both companies competed for financial resources and land allocation. This even led to a stretch of around 200 miles of rails running parallel and very close to each other.

Ultimately, Congress defined "Promontory Summit" north of the Great Salt Lake as the connection point. On In May 10, 1869, the Central Pacific's "Jupiter" and the Union Pacific's road number 119 came together.

The tracks were symbolically joined together by a golden track spike, which was immediately replaced by an iron one. The "Central Pacific" had ultimately built 690 and the "Union Pacific" 1,086 miles of the transcontinental line that now linked East and West with each other. In 1903, the successor to the Central Pacific, the Southern Pacific, began construction of a cutoff line across the Great Salt Lake.

The historic route via Promontory Summit deteriorated soon after that and its track was ultimately removed in 1942. Yet in the Fifties interest in this historic site reawakened.

Initially under private care, Promontory was raised to the status of a "National Historic Site" on April 2, 1957. On July 30, 1965, this 1,100 hectare / 2,718 acre large site was transferred to the federal National Park Service, which undertook considerable efforts for its part to provide visitors with a vivid look at the construction of the first transcontinental railroad in America. In 1975, it granted a contract to replicate prototypical the two 4-4-0 locomotives from the opening ceremony, the "Jupiter" of the Central Pacific and road number 119 of the Union Pacific. After four years of work, the two replicas entered service on May 10, 1979 on a 1.7 mile / 2.7 kilometer long newly laid line and steamed towards each other for the 110th anniversary as in the past. Since then the two units leave their locomotive shed under their own power each morning in the summer season, steam to the original scene and return in the early evening back to the locomotive shed. In the visitor center, there are instructional films and numerous display pieces for the historic event. As a special "highlight", a committed team of volunteers does a reenactment of the "Driving of the Last Spike" ceremony from the end of May to the beginning of September. This event takes place on Saturdays as well as holidays and viewers may often take part as extras. Let me know how many you want and I'll send an offer. If the picture doesn't match the title, then go with the title. If the Road number of a train does not match the title, then go with the title. If you are completely unsure then contact me.

Please don't assume anything. Example: if you're in a category for N Scale Locomotive and you don't see the scale in my listing then contact me. There is no guarantee that the locomotive is N Scale.

If you are the slightest bit unsure please research it or contact me. DO NOT OPEN THE ITEM! If you open it I can't take it back since I won't be able to resell it. Customer ordered the wrong product or just don't want it. Items must be in "new, unaltered and unused condition".

Must be in original box unopened with no damage to the package or packaging including cellophane wrapping (we need to be able to resell that product as new). DO NOT OPEN THE ITEM IF YOU ARE GOING TO RETURN IT! That is 20% of the items price you paid. Wrong item sent or defective product. If we make a mistake by sending you the wrong item or you get a defective product we will make it right at no cost to you. The item "LGB 29000 G Scale Golden Spike Steam Locomotive Set" is in sale since Saturday, November 30, 2019. This item is in the category "Toys & Hobbies\Model Railroads & Trains\G Scale\Locomotives". The seller is "crazymodeltrains" and is located in Fremont, Nebraska. This item can be shipped to United States.