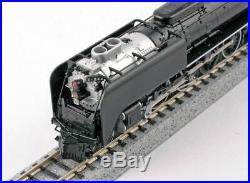 N scale Union Pacific FEF-3 series 4-8-4 steam locomotive by Kato. Ready to run on your DC layout and DCC ready for your decoder.

New coreless motor design with dual brass flywheels for silky-smooth performance at all speeds, even slow crawls. Special cross-braced shock absorbers equalize the pressure on the locomotive drivers to maximize traction. DCC friendly design, allowing for easy drop-in installation of DCC. A total of 45 FEF (four-eight-four) locomotives were built between 1937 and 1944, with the last 10 FEF-3s being delivered in 1944. After World War II, coal supplies were affected by a series of strikes. In order to safeguard operations, UP converted the 800s to oil burning, and a 6,000 US gallons tank was fitted in the bunker space. Otherwise, few modifications were needed to insure years of mainline service.

These were the last steam locomotives delivered for the Union Pacific. Number 844, the last of the FEF-3 class, is the longest continuously operating 4-8-4 engine in the world, and the only one never retired by a Class I railroad.

Like many of the "late era" steam locomotives, their final design was cut short by the advent of new monarchs of the rails, diesels. Today, FEF-3 #844 (at some times during history also known as #8444 to avoid numbering conflictions with a diesel loco) survives to pull excursion trains as a publicity locomotive for the Union Pacific, and is one the UP's oldest operating locmotives. Accompanying the "living legend" FEF-3 is always at least one of a pair of Union Pacific Water Tenders, carrying spare water for the steam engine (Water filling stations being a rarity in the diesel era).

These unique re-built cars have seen service as both Steam and Gas Turbine Electric fuel tenders before finally settling into their current forms as part of UP's steam heritage fleet where they operate as separate (but always-present) cars. Add the Kato #106085 UP 2-Car Water Tender Set.

This item is in the category "Toys & Hobbies\Model Railroads & Trains\N Scale\Locomotives". The seller is "jimstrns" and is located in Scranton, Pennsylvania. This item can be shipped to United States, Canada, Japan.