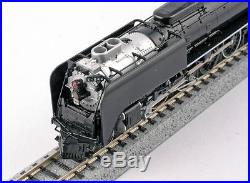 Accompanying the "living legend" FEF-3 is always at least one of a pair of Union Pacific Water Tenders, carrying spare water for the steam engine (Water filling stations being a rarity in the diesel era). These unique re-built cars have seen service as both Steam and Gas Turbine Electric fuel tenders before finally settling into their current forms as part of UP's steam heritage fleet where they operate as separate (but always-present) cars. FEF-3: New coreless motor design with dual brass flywheels for silky-smooth performance at all speeds, even slow crawls.

The seller is "jamnanhobby1" and is located in Jessup, Pennsylvania. This item can be shipped to United States.