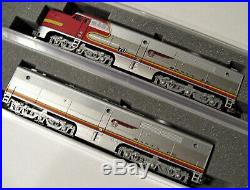 N SCALE A/B 2 LOCO POWERED SET. YOU GET BOTH POWERED LOCOS FOR 1 LOW PRICE AS FOLLOWS. ALCO's beautiful PA-1 is one of America's most famous locomotives.

It was ALCO's entry into the passenger train diesel craze, competing directly with the E-Units from EMD. Originally run on the Texas and New Orleans, Southern Pacific PA's #6055 and 6056 were later put into service on the SP's coastal division, pulling trains such as the Morning Daylight. ALCO locomotives were also used in service with the famous "California Zephyr" passenger train, adopting a number of paint schemes, the most famous of which was perhaps the "Prospector" paint scheme.