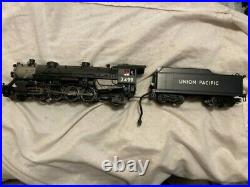 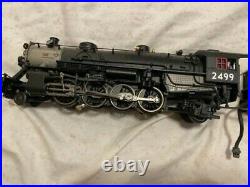 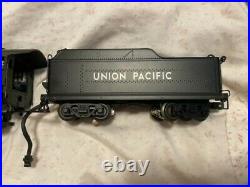 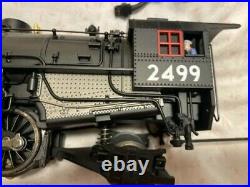 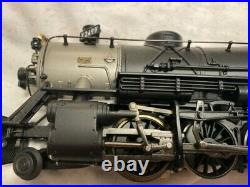 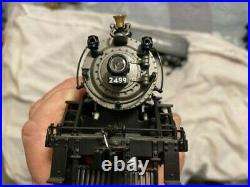 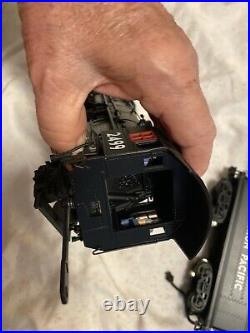 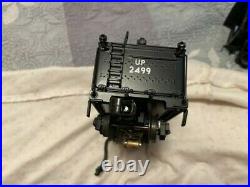 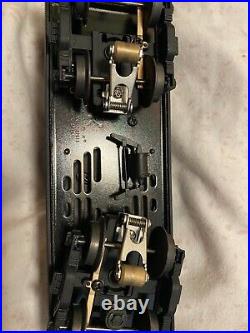 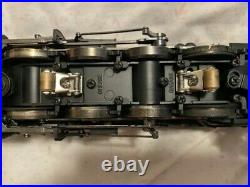 This loc has very little running time on it. See photos of third-rail pick-ups.

There is no box and the associated items usually found with upper-end K-Line locs are not present. The Light 2-8-2 Mikado was the first locomotive produced under the USRA, the United States Railroad Administration.

This body attempted to run the US railroads as one entity during World War I. To this end, the USRA sought to standardize locomotives. The 625 Mikados built during this period were produced by Alco, Baldwin and Lima, all major locomotive manufacturers. An additional 600 Mikado copies were built after the dissolution of the USRA.

The K-LINE Scale Mikado is another scale engine that is designed to operate on a curve as small as 31 inches. Featuring loads of details such as opening cab hatches, illuminated cab and electronics controls under the tender hatches, this engine is available in a variety of road names and configurations. The Northern Pacific Railroad created the 2-8-2 Mikado in 1906 by putting the firebox entirely behind the drivers and adding a trailing truck. This allowed both the boiler and the firebox to be larger than the current star of American railroads, the 2-8-0.

This engine was one of several chosen by the USRA for war-time production. While the general appearance of Mikados were specified by the USRA,'modern devices of proved merit' were acceptable for application to the locomotives. This created tremendous variety among the 32 original railroads that ran these engines. One of the most common changes was to move or replace the large USRA headlight.

The K-LINE 1:48 Scale models feature variety in detail parts as well, such as the pilot, number boards and headlight. Each roadname is produced with prototypical attention to these small details. Die-Cast Boiler and Tender Body.