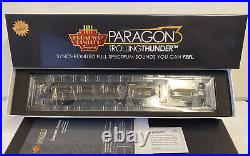 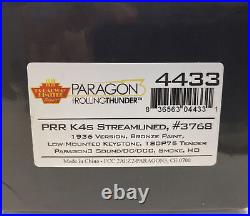 This is Broadway Limited product number #433 and road number #3768. A number of K4s locomotives had streamlining applied over the years. All were later removed, restoring the locomotives to their original appearance. In February 1936, locomotive #3768 was clad in a shroud designed by famed industrial designer Raymond Loewy.

This highly concealing, enveloping streamlined casing hid most of the functionality of the steam locomotive, leading to its nickname of The Torpedo by train crews. At first, the locomotive was not painted in standard Dark Green Locomotive Enamel (DGLE) but instead in a bronze color.

Chuff sound intensity varies with load. Individually adjustable sound volumes for most effects. This item is in the category "Toys & Hobbies\Model Railroads & Trains\Railroads & Trains\Locomotives". The seller is "thetoycrossing" and is located in this country: US.