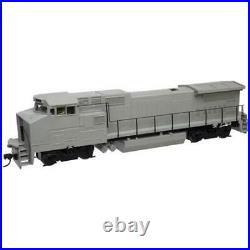 These four-axle, high horsepower engines are still in service today in North America. By the early 1990s the North American Cab had begun to replace the?

Cab on regular production GE 4 and 6-axle locomotives. The only order for 4-axle Dash 8-40Bs with this new cab came from Santa Fe, and thus the Dash 8-40BW model was unique to that road. A total of 83 units total were built and many are still in service today for BNSF. In 1991 Amtrak, faced with a motive power shortage, turned to GE for an order of 20 Dash 8-32BWH locomotives. This unique model was basically a Dash 8-32B locomotive equipped with a North American Cab and built on the longer Dash 8-40BW frame.

Some additional modifications for passenger service were included. A total of 20 units were built and they are still in Amtrak service today.

Features: Operating ditch lights (HO DASH 8-40BW/8-32BHW only) Realistic die-cast underframe Standard cab or gull wing cab as per the prototype (HO DASH 8-40BW/8-32BHW only) Five-pole skewed armature motor with dual flywheels for optimum performance at all speeds Directional lighting Factory-equipped with AccuMate knuckle couplers Painted crew figures Separately-installed scale windshield wipers, metal grab irons and fine scale handrails Highly detailed coupler cut bars Multiple unit hoses and trainline hoses Snowplow Shock absorbers Piping on trucks DCC Operation FEATURES: Supports all DCC-programming modes Flexible mapping of function keys F0 to F28. A total of six DCC function outputs are available Follows all NMRA DCC standards and recommended practices. Analog (DC) Operation FEATURES: The LokSound Select Dual-Mode decoder allows your Atlas Gold Series locomotive to be used on DC as well as on DCC layouts. Please note that the Atlas Quantum Engineer will NOT operate an Atlas Gold Series locomotive equipped with a LokSound Select decoder on an analog (DC) layout. However, the sound and lighting functions of the LokSound Select decoder in the Atlas Gold Series DASH 8 locomotive can be controlled by an easy-to-use basic DCC system Also note that on a DC-powered layout, a DCC and sound equipped locomotive (such as the Atlas Gold Series DASH 8) CANN OT be consisted with another locomotive that does not also have both DCC and sound.

This statement does NOT apply to DCC-equipped locomotives operating on a DCC layout. Sound Functionality FEATURES: Over 20 sound effects are available, including engine start-up and shutdown, prime mover sounds through all eight notches, bell, air horn, air compressor, dynamic brakes and more. There are 16 user-selectable horns, 2 user-selectable bells, and 2 user-selectable synchronized brake squeals. Manual and Automatic Notching modes with the ability to change modes?

Are provided for true realism. Picture may be of another Road Number. Let me know how many you want and I'll send an offer.

Customer ordered the wrong product, or just don't want it. DO NOT OPEN THE ITEM IF YOU ARE GOING TO RETURN IT! Must be in original box unopened with no damage to the package or packaging (we need to be able to resell that product as new).

Items must be in "new, unaltered and unused condition". Do not tape anything to the item.