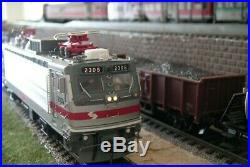 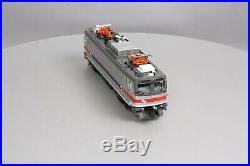 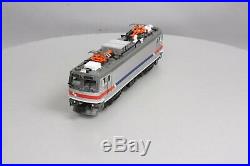 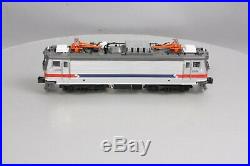 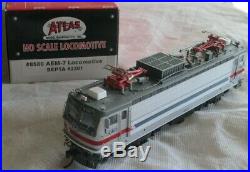 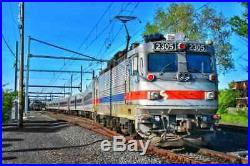 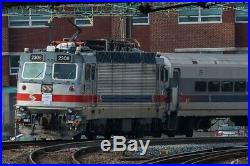 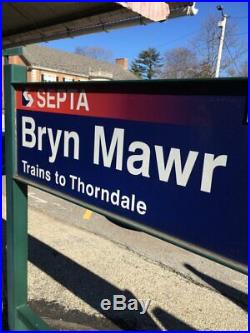 HO Scale Atlas SEPTA #2305 AEM-7 Electric Locomotive. Powered Like New with Box. The AEM-7 is a twin-cab four-axle 7,000 hp (5.2 MW) B-B electric locomotive built by Electro-Motive Division (EMD) and ASEA between 1978 and 1988. The locomotive was a derivative of the Swedish SJ Rc4 designed for passenger service in the United States.

The primary customer was Amtrak, which bought 54 for use on the Northeast Corridor and Keystone Corridor. The Electro-Motive Division of General Motors (EMD, now Electro-Motive Diesel) built them, with carbodies from the Budd Company and electrical and running gear imported from Sweden. Amtrak ordered the AEM-7 after the failure of the GE E60 locomotive to replace the GG-1 fleet. The first locomotives entered service in 1980 and were an immediate success, ending a decade of uncertainty on the Northeast Corridor. In the late 1990s, Amtrak rebuilt 29 of its locomotives from DC to AC traction. The locomotives continued operating through the arrival of the final Siemens ACS-64 in June 2016. MARC retired its fleet in April 2017 in favor of Siemens Chargers, and SEPTA retired all seven of its AEM-7s in November 2018 in favor of ACS-64s. SEPTA will continue to use electric traction, replacing its seven AEM-7s and lone ABB ALP-44, an improved AEM-7, with fifteen ACS-64s. South Eastern Pennsylvania Transit Authority (SEPTA) and the AEM-7. The first SEPTA ACS-64, #901, entered revenue service on July 11, 2018. On December 1, 2018, SEPTA held a farewell excursion for the AEM-7 and ALP-44 locomotives along the Paoli/Thorndale Line (see image #12). But instead of simply pulling the locomotives out of service (which were in use for over 30 years on SEPTAs commuter rail lines), SEPTA gave rail enthusiasts the opportunity to take one last excursion before the equipment is officially pulled from the Authoritys fleet (see image #10 -#11). Making it one of the most beloved engines in Philadelphia since the GG-1. Philadelphia affectionately called the AEM - 7 "The Swedish Meatball", because of their origin. For over 60 years, Atlas has been a leader in the world of model railroading. Atlas has its roots in model railroad track and accessory making through invention, innovation, and ingenuity. Atlas has a proud reputation as a family-owned business and is well-known for quality and excellence. Repair parts and accessories are available from the companys website. HO Scale Atlas SEPTA AEM-7 Electric Locomotive #2305 Powered like new with box. The detail on the models is accurate and well rendered. All major dimensions are within an inch or two of those shown in drawings published in the June 1993 Model Railroader. The grids on the AEM-7 match those in photos. The glazing in the windows is clear and flush-mounted. Both cabs have interior detail, and one contains a crew. The pilots on each end have m.

Hoses and uncoupling levers and come equipped with Accumate magnetic knuckle couplers. Grab irons are separate steel wire pieces, and the roof detail is thorough with the bare copper wire a particularly nice touch. If there's any disappointment it's the resistor-grid housing, which represents the grids with perforations on the side sheets. Even this is adequate for all but close inspection. At speed step 28 on an NCE PowerCab Digital Command Control (DCC) test setup, NMRHA sample reached 98 scale mph.

This is a bit short of the top speed of the prototype, but still fast for a model railroad. In direct-current testing, the model reached 113 scale mph at about 13V, the maximum output of our Model Rectifier Corp. Further testing in DC revealed a starting voltage of 5.5V for sound, 7V for movement at 2 scale mph. Sounds were automatic, and the lights, including headlights, marker lights, and rooftop strobes, operated depending on direction. Accumate(R) couplers, operating directional headlights and marker lights. Full cab interior with painted crew member. Separately applied wire grab irons roof detail and accurate painting and lettering. Also includes an integral switch on the circuit board which allows the modeler to select either the pantographs or track power for easy operation.

Unit has been Track Tested and runs well. Upgrading from DC to DCC. HO-Scale decoder designed as a direct-plug replacement decoder for engines equipped with 8-pin NMRA sockets.

By far one of the easiest decoders to install, the DP2X can be plugged into many locomotives with no effort. Provides superior slow speed control and high performance under load. Super-quiet motor control for "buzz" free motor performance.

Decoder will automatically detect DC power. You can also configure how your lighting effects function on DC. This feature allows the decoder to talk to the command station.

RailCom supports expansion for new features. Allows you to make custom acceleration and deceleration curves. This decoder can be used with 12 Volt bulbs. Buttons 0 through 12 may be used to control the lighting functions of this decoder.